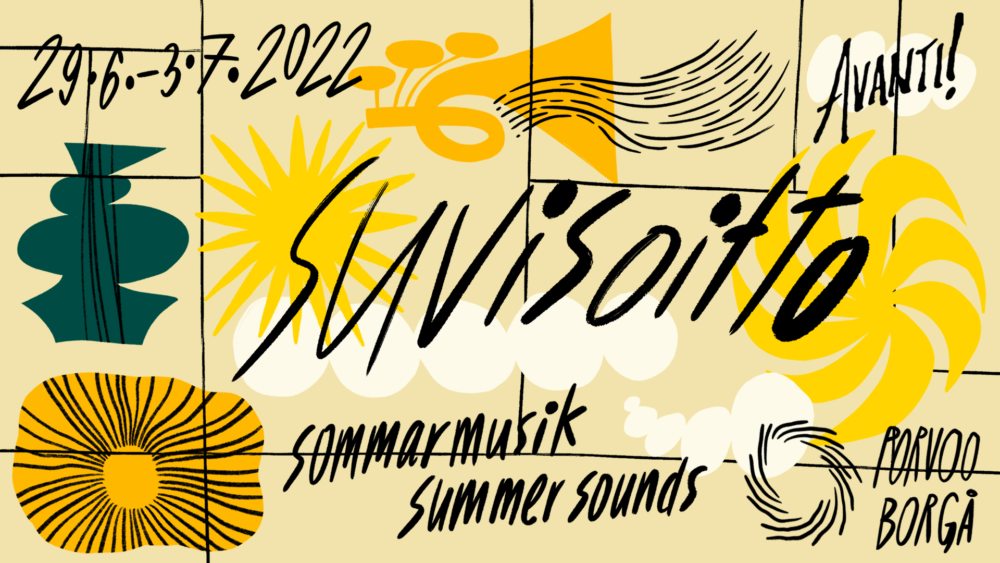 Now entering its 37th season already, Avanti’s Summer Sounds will this year run in Porvoo from June 29 to July 3. The Artistic Director of the festival themed “Body Language” is Julia Wolfe, one of today’s greatest American composers.

Wolfe has emerged in the 2000s with works combining American folklore, genres ranging from rock to minimalism, crackling energy and unique line-ups. Summer Sounds will be presenting a cross-section of her compositions, culminating in riSe and fLY at the final concert. Drumming his body and percussions in this masterpiece will be legendary Colin Currie. Resident in New York, Wolfe is one of the founder composers of the Bang on a Can artists’ collective dedicated to contemporary music, together with David Lang and Michael Gordon. The programme, with its strong American slant, will also afford glimpses of other composers colleagues of Wolfe, including two of her previous students Shelley Washington and Anna Clyne.

Backing these composers of the “postminimalist” era will be works by György Ligeti, Steve Reich, Meredith Monk, John Adams and John Luther Adams. And even older echoes of the past will be Samuel Barber’s Adagio for Strings and Aaron Copland’s Appalachian Spring, both of which, back in the day, paved the way for America’s open-faced music shunning neither emotions nor ‘alien’ genres. For even more distant exemplars, Wolfe has invited along Fanny Mendelssohn, Bach and Beethoven, the very personification of dynamic, foreword-looking music.

Guest conducting the Avanti Chamber Orchestra will be Brad Lubman, a leading performer of contemporary American music. In addition to Colin Currie, the soloists will include Bang on a Can All Stars guitarist and multi-instrumentalist Mark Stewart and the Norwegian Trio Mediæval. The riveting József Hárs, a trusted Avanti partner, will also be appearing in the role of conductor.

Porvoo awash with music – sound art on the west bank

Summer Sounds will jump the festival gun in Pernaja Church on Wednesday evening, and Avanti folk will also be taking over Old Porvoo during the festival. The fanfare will this year ring out in Town Hall Square at 12 noon on Friday July 1, and from there continue to Porvoo Cathedral for a free chamber concert. Saturday will feature promising young composers, when the works they have created at the Composition Workshop will at last be premiered at the free concert beginning at 13:00 in the Voluntary Fire Brigade Hall.

One of the items on the Summer Sounds programme is a sound art work on the west bank of the river, as part of the Porvoo art project combining new urban development and art. One of the first results of this project, a sound art work born of collaboration between Avanti and the Cultural Services of the City of Porvoo, will be launched. Issuing from the loudspeakers attached to the intelligent street lamps will be short works composed for them by Maija Hynninen, Jennah Vainio and team Minna Leinonen–Jussi Suonikko.

Avanti is proud to congratulate the Porvoo Art Factory, once again the home base of the Summer Sounds festival and now celebrating its 10th anniversary. Each year from 1986 to the first decade of the 21st century, the old factory building was given a good dusting to get it ready for Summer Sounds, until the decision was at last made to convert it into a cultural centre. The Art Factory hall opened in 2012 was named the Avanti Hall, which is an indisputable recognition of the ever-closer relationship between Summer Sounds and the City of Porvoo.

Lille Santanen has given Avanti’s Summer Sounds a new visual image all of its own. This incorporates a special Avanti typography in a distinctive style described by her as organically playful.

– When I was designing the visual Summer Sounds image, I thought each of the motifs would find a natural place in the grid. But when I got down to work, I found they did just as they pleased and settled wherever they fancied. I reckon this is precisely what happens to performers and guests alike at Summer Sounds.

Tickets for the Avanti XXXVII Summer Sounds: “Body Language” festival are on sale at Lippupiste outlets and www.lippu.fi. For details of the concert programmes see https://avantimusic.fi/en/program

Buy a pig in poke from Avanti!

Read the programme booklet of the Idyllistä Katastrofiin concert here!
Scroll to top
Tämä sivusto käyttää evästeitä (eng. cookie), joilla parannetaan palvelun laatua.
We use cookies to ensure that we give you the best experience on our website. If you continue to use this site we will assume that you are happy with it.OK
Privacy & Cookies Policy